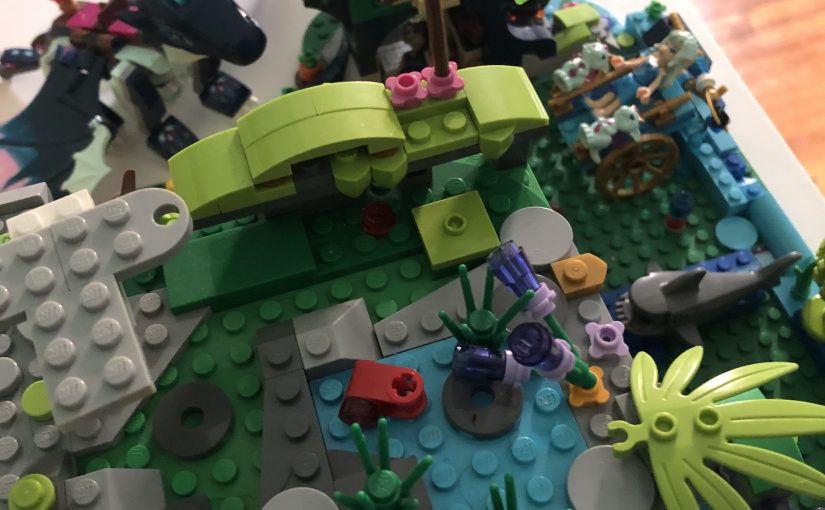 This is the fourth post in a series exploring LEGO® as a Metaphor for Software Reuse. The story is evolving as I go because I keep finding interesting things in the data. I’ll tie it all up with the key things I’ve found at some point.

In this post we’re looking from the part perspective – the reusable component – at how many sets or products it’s [re]used in, and how this has changed over time. All the analysis from this post is available at https://github.com/safetydave/reuse-metaphor.

In this post we get into the parts inventory data from the Rebrickable data sets, image content & API. This data gives us which parts appear in which sets, in which quantities and colours. For instance, if we look at the minifigure flipper from part 3, we can chart its inclusion in sets as below.

The parts inventory data includes minifigures. I may later account for the effect of including or excluding minifgures in these various analyses. We can also tell if a part in a set is a spare; according to the data, 2% of LEGO parts in sets are spares.

These parts appear in a significant fraction of sets, but we can already see a 50% reduction in the number of sets in just the top 25 used parts. Beyond this small sample, we can plot the number of sets that include a given part (call it part set count), as below.

This time we have used log scales on both axes, due to the extremely uneven distribution of part set counts. In contrast to the thousands of sets including top parts, a massive 60% of parts are included in only one set and only 10% of parts are included in more than ten sets. The piecewise straight line fit indicates a power law applies, for instance approximately count = 10000 / sqrt(rank) for the top 100 ranked parts.

Uneven distributions are often expressed in terms of the Pareto principle or 80/20 rule. If we define reuse instances as every time a part is included in a set, after the first set, then we can plot the contribution of each part to total reuse instances and see if this is more or less uneven that the 80/20 rule.

We find a similar phenomenon if we consider the quantities of parts included in sets, rather than just the count of sets per part. We could repeat the whole analysis based on quantities (and the notebook has some options for doing this), but I was fairly satisfied the results would be similar given the degree of correlation we find, below.

I was intrigued, though, by the part that appeared many times in a single set, then never again (the uppermost point of the lower left column). It turns out it is a Window 1 x 2 x 1 (old type) with Extended Lip included in a windows set from 1966 that probably looked a bit like this one.

This brings us neatly to the “long tail” to round out this view of reuse as parts included in multiple sets. As per the distribution above, the tail (of parts that belong to only one set) is really long and full of curiosities. The tail is over 22,000 parts long, though these belong to only about 10,000 unique sets. The parts belong about 60/40 to sets proper vs minifigure packs. Here’s a tail selection – you’ll see they are fairly specialised items like stickers, highly custom parts, minifigure items with unique designs, and even trading cards!

Parts Included in Sets Over Time

Part reuse might vary with time, and might be dependent on time. In previous posts we’ve seen an exponential increase in new parts and sets over time and an exponential decay in part lifetimes. We can plot part reuse (set count) against lifespan, as below.

This shows some correlation – which we might expect as longievity is due to reuse and vice versa – but I was also intrigued by the many relatively short-lived parts with high set counts (in the mid-top left region). Colouring points by the year released shows that these are relatively recent parts (at the yellow end of the spectrum). This shows that, as well as long-lived parts, more recent parts also appear in many sets, which is good news for reuse.

We see that although many parts released in the last few decades are reused in 100s or even 1000s of sets, the median or typical part appears in only a handful of sets. With 100s to 1000s of sets released each year recently, the sets are reusing both old and new parts, but the vast majority of parts are not significantly reused.

Top Parts for Reuse Over Time

This shows variation in proportional set representation for the top parts from about 10% to 50% over the last 40 years. However, there was a very noticeable drop around the year 2000 to a maximum of only 20% of sets including top reused parts. Interestingly, this corresponds to a documented period of financial difficulty for The LEGO Group, but further research would be required to demonstrate any relationship. Prior to 1980, the maximum proportional representation was even higher, indicating a major intention of sets was to provide reusable parts.

From 2000 onwards, the all time ranking becomes more apparent, as the lines generally spread to match the rankings. We can also see this resolution of ranks in a bump chart for the top 4 parts over the time period from just before 2000 to the present.

As in previous posts, here’s where I speculate on what this data-directed investigation of LEGO parts and sets over the years might mean for software development. This is only on the presumption that – as often cited informally in my experience – LEGO products are a good metaphor for software. I take this as a given for this series, and as an excuse to play with some LEGO data, but I don’t really test it.

Given the reuse of LEGO parts across sets and time, we might expect that for software:

I plan to look further into the relationship between parts and sets, and how this has evolved over time.

LEGO® is a trademark of the LEGO Group of companies which does not sponsor, authorize or endorse this site.